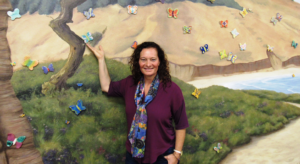 There is something special about an artist who finds an expressive way to teach both children and adults about a moment in history that should never be forgotten. That artist is Cheryl Rattner- Price, who co-founded The Butterfly Project with educator Jan Landau in 2006. The Butterfly Project or Zikaron V’ Tikvah is a non-profit organization that uses art and education to remind and teach others, especially students, about Holocaust remembrance and the horrible tragedy that hatred and intolerance produced. This can lead to healing discussions about anti-Semitism, racism, and bullying, an important message in today’s environment.

For Rattner-Price, an artist who came to San Diego form the east coast in 1998, the Butterfly project is now her life’s work. While living in New Jersey and New York, she had her own business and later opened up a studio where she created ceramics, tiles and mosaics. Although she was successful, it had been her dream since she was 15 to move out west. She arrived in San Diego in March 1998 with her one year old daughter and then husband, Michael Price. They had another daughter here. Rattner-Price is very proud of her daughters Emily, who is now 21, and Julia who is 18. The girls went to the San Diego Jewish Academy.

When she first came, Rattner-Price opened up a studio in Del Mar, but later decided to close it to spend more time with her family. She became more involved with SDJA, and this led them to ask her to be their artist in residence. She helped the academy to create a very large free standing menorah —part of community work — on campus that represented the seven values of the school. It was art with a message. She then teamed up with Landau, a former SDJA principal. The Butterfly Project, more art with a message, was born

This non-profit is called the Butterfly Project because rather than deliver the lesson in a dry, conventional lecture, it is brought alive by painting ceramic butterflies. The lessons are also made more relevant to the students by having actual survivors or children of survivors come and talk. For example, Sonia Fox-Ohlbaum, part of the education team, often shows the camp prison clothing that her father wore. It is a way of making the abstract more concrete and real. Finally, there is something symbolic about a ceramic butterfly going through fire and being reborn. This is the kind of experience that stays with you. There are some beautiful butterfly installations in various locations, including San Diego Jewish Academy, along with many local schools and synagogues.

Rattner-Price and Landau created the Butterfly Project after being inspired by “The Paper Clips Project”. Students in Whitwell, Tennessee collected over six million paper clips to represent and honor the six million Jewish victims of the Holocaust. The Butterfly Project wants to memorialize the 1.5 million children who perished in the Holocaust by having students of all ages paint ceramic butterflies. As Rattner-Price says, “the sweet spot is middle school students”. The goal is to paint 1.5 million butterflies. So far, they have visited classrooms in many parts of the United States and around the world, including Canada, Mexico, Israel, Australia, France, Tanzania, Cuba, Morocco, and Poland. They have also been to almost every synagogue in San Diego. They want to permanently display the painted butterflies as symbols of resilience and hope.

On their website, they say that the project drew on inspiration not only from the Paper Clips project, but also from The Diary of Anne Frank and especially from the haunting poem, “The Butterfly” written by Pavel Friedmann while he was in Theresienstadt, as the Germans called it, or the Czech ghetto of Terezin. The last line of the poem is, “Butterflies don’t live here in the Ghetto”. Friedmann died on April 6, 1942.

The project now has an award-winning documentary about their work entitled, Not the Last Butterfly. This powerful film is another way of reaching out to the world. They also have butterfly kits available to the public for $180. However, because of generous donations, they have kits exclusively for teachers and schools for $72. These kits include 36 ceramic butterflies for painting or glazing, glazes in various colors (acrylic paints are available for those who do not have access to a kiln to fire glazed butterflies), paintbrushes, and 36 unique bio cards that tell the story of an individual child who died in the Holocaust.

For more information on the Butterfly Project, visit thebutterflyprojectnow.org.