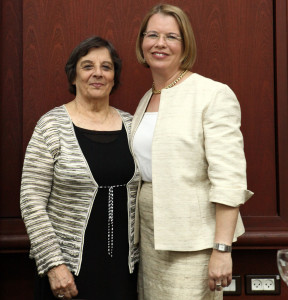 Blu Greenberg, co-founder of the Jewish Orthodox Feminist Alliance, and Prof. Ruth Halperin-Kaddari, head of the the Ruth and Emanuel Rackman Center for the Advancement of the Status of Women, at the Rackman Center’s “bat mitzvah” celebration. Credit: Yael Havoosh.

The controversy surrounding Israel’s complex framework of laws relating to family life is well-known. Often portrayed via popular culture in films and books, the laborious get (Jewish divorce) process, along with other issues relating to the status of women in family law, are a major concern among both secular and Torah-observant Israelis.

Against that backdrop, one Israeli institution dedicated to bringing about legal and social change is the Ruth and Emanuel Rackman Center for the Advancement of the Status of Women, housed within the faculty of law at Bar-Ilan University in Ramat Gan.

This week, the center celebrated its “bat mitzvah” year with a ceremony attended by former Knesset Committee for the Status of Women chair Aliza Lavie, Meretz party head Zehava Gal-On, rabbis, judges, members of Bar-Ilan’s board of trustees, supporters from the American Friends of Bar-Ilan University, faculty members, and students.

The Rackman Center is a unique body that combines legal and legislative advocacy with research, and also maintains a legal aid clinic that provides free legal advice and representation to women on issues of custody, divorce, property, and child support.

Prof. Ruth Halperin-Kaddari, head of the Rackman Center, explained that the clinic advocates for the rights of agunot—Jewish women whose husbands refuse to give them a religious divorce—and works to eradicate extortion of women and the exploitation of children as leverage in divorce.

Over the years, the center has brought appeals before Israel’s Supreme Court and Rabbinic Court, in addition to bringing petitions before the country’s High Court of Justice in an effort to create legal change.

The keynote speaker for the center’s bat mitzvah event was veteran modern Orthodox feminist leader Blu Greenberg, co-founder of the Jewish Orthodox Feminist Alliance and recipient of an honorary doctorate from Bar-Ilan during the school’s 2015 board of trustees gathering.

Prof. Halperin-Kaddari called Greenberg “a woman who has inspired a whole generation of Jewish women around the world, [the] founding mother of Orthodox feminism.”

In her talk, titled “The Interplay of Halakha and Justice: The Aguna as a Case Study,” Greenberg said, “It appears that halacha (Jewish law) trumps God’s justice, a great pity in a system so centered on justice.” She called for a “systemic solution to the problem, a solution within the halacha that can cover every case of [get refusal]—which must be defined formally as a function of time so that urgent methods can be applied.”

Greenberg lauded the work of advocacy groups for agunot, but noted that the rallies against recalcitrant husbands work in only a few cases, and “not for the thousands of women in the rabbinic courts subject to get abuse.”

Regarding Jewish-legal prenuptial agreements, she feels they are positive development, but since they are so far not mandatory and not used by the haredi world, most existing Jewish marriages are not covered by them.

“They (prenuptial agreements) should be viewed as meritorious but small stopgaps, and not a global systemic solution,” she said.

Greenberg called for rabbis to declare that every case of a recalcitrant husband violates the Torah’s standards of justice and that the men who refuse to grant a divorce “are nothing more than extortionists, evildoers.”

“But I have no illusions as to this ever happening,” she said.

A possible game-changer, however, is the International Beit Din (IBD) religious court—created 10 months ago and headed by Rabbi Simcha Krauss, whom Greenberg called “a great and daring talmid chacham (scholar).” Krauss and IBD’s judges, she said, have “declared war on iggun (the creation of agunot through get refusal).” Krauss, a religious Zionist leader, is a former pulpit rabbi in New York City’s Queens borough who made aliyah in 2005.

According to Greenberg, the IBD is totally committed to halachic marriage and divorce, yet is ready to include in those principles some contemporary arguments for leniencies that have been neglected by mainstream rabbinic authorities in favor of traditional stringencies.

“The IBD has its eye on the aguna, her suffering, and that of her children, and tries its best to ameliorate her condition. It uses, with pleasure and gratitude, those lenient precedents,” Greenberg said.

“We should all consider that the release of agunot, as many great rabbis have said in the past, is the work of God,” she said

Halperin-Kaddari told the audience, “I pray for the day when you will join us for the final event of the dismantling of the Rackman Center, held because its work is no longer necessary.”