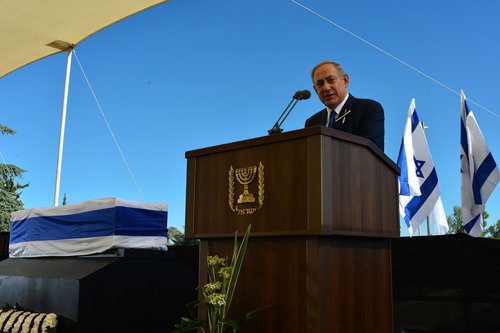 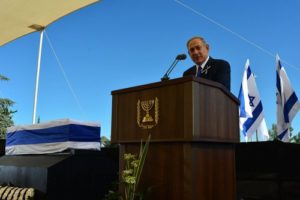 Israeli leaders from across the political spectrum, alongside dignitaries from 70 countries worldwide, attended funeral.

Peres’ coffin was taken to Mount Herzl on Friday morning, arriving at the national cemetery at 8:30 a.m.

President Reuven Rivlin’s eulogized Peres as one whose efforts to promote peace were inspiring.

“You were not just a man of vision, but a man of action. I was privileged to watch you with amazement, as a partner in the construction of the State of Israel from its inception,” Rivlin said.

“You spared no effort to strike peace. … And in the tumultuous Middle East, where only the strong survive, peace can only be obtained if it stems from the constant guarantee of our might. Such power is but the means to an end — the purpose of existence and coexistence, prosperity, peace and progress, for us, our Palestinian neighbors, and the nations of the region.”

“He showed us that justice and hope are at the heart of the Zionist idea. A free life in a homeland regained, a secure life in a nation that can defend itself by itself. A full life and friendship with nations who can be counted on as allies.”