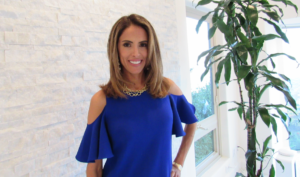 Maru Davila is a slim woman with lustrous skin who radiates health and confidence. To look at her, one would never guess that she once was almost 60 pounds overweight and struggled with her health. She suffered from many chronic problems, including serious kidney infections, and digestive issues. Today she is the picture of health, but the journey getting there wasn’t easy. She had to learn a whole new way of eating. Fortunately for us foodies, she has developed recipes that make healthy and delicious meals and snacks. Many of those recipes can be found in her book, The Mexican Food Diet.

Many people think Mexican food is all about eating rice, beans, cheese, tortillas and high fat food, and in some cases, that is true. However, Mexican food is so much more than that and Davila is out to prove that Mexican food can still be tasty while also being very nutritious.

In her cookbook, Davila has modified recipes-many taken from her mother and grandmother-and turned them into satisfying, and good for you meals and snacks. For example, there is a recipe for guacamole made with baked jicama chips. The guacamole contains onions, garlic, cilantro, lime juice, hot peppers, and olive oil, all known for their health benefits. The jicama chips are a tasty substitute for tortilla chips.

Davila was born in Mexico City. Her father was an engineer and her mother a homemaker who later became a chef. It had been Davila’s dream since she was 12 years old to attend Harvard Business School. She was successful in achieving that goal and graduated from there in 1997. She moved to San Diego after graduating. She came here hoping to be an investment banker. However, she was not in good health and began to feel torn between becoming a successful investor or dedicating some of that time to finding a husband and having children. She also had to decide if she wanted to pursue her career in San Diego or move to New York City. She ended up staying and she met someone and got married. She also began working at a consulting company, but still had lingering doubts about not going to New York.

In addition, the health problems she had experienced most of her life began to get worse. She was feeling stuck and depressed, and reaching the end of her rope. Her career was going well, but she didn’t feel healthy, and her marriage was suffering too. She decided to take a break and went to live in Paris for awhile.

Although raised a Catholic, she never felt it was the right fit for her. In Paris, she lived in a Jewish community and it was amongst that group that she found her “home”, so to speak, as she felt very connected. She had a close group of friends and she began to observe the Sabbath. When she returned to San Diego she decided to convert, so she studied with Rabbi Efraim Warshaw and Rabbi Moshe Levin. She did her conversion and Mikvah in Los Angeles. She went the conservative route and even became kosher for a few years. She discovered that her mother was a descendant of Sephardic Jews. She was active in the Jewish community and felt Judaism enriched her life and made her happy. However, she continued suffering from health problems and didn’t like being on so many medications. Her first marriage also ended in 2000.

Then, in 2008, a series of events happened that began to turn her life around. First, she met Andrew Dumke whom she later married. In 2010, her daughter, Charlotte, was born. All her life she had been a runner and athlete, so she decided to begin competing in triathlons. This in turn exposed her to a different type of eating. She noticed that eliminating certain foods had a big impact on her physically and it also affected her chronic conditions. A light bulb went off, and she started to connect the dots of how nutrition and how you eat can affect you physically, mentally and emotionally.

She decided to study at The Institute for Integrative Nutrition and took classes online. She got certified as a health coach. She also got herself tested and found out her body had issues with the protein in dairy products and digesting gluten and certain other foods. Years of taking antibiotics for many infections had ruined the flora in her digestive system and her body was out of balance.

After so many years of dieting [she had three sets of clothes in her closet of various sizes], she knew she had to come up with a healthy lifelong plan of eating. Thus, she developed her Flaca Forever plan [www.flacaforever.com]. The plan has three parts. The first part is a two week detox. The second part is to stop dieting and change that mentality by following a lifelong plan of eating. The third part is to control cravings. She started surrounding herself with experts to help with the above plan, so she herself and others who followed could develop a different and healthier lifestyle.

The detox was to help the body get rid of damaging toxins. To stop dieting and control cravings, there needed to be the correct ingredients and whole foods. She also felt [as do many experts] that taking out dairy products and gluten was important. Finally, natural supplements were also added. As she was working on all this, she realized that Mexican food had many detoxifying elements which could be used to make healthy meals that taste good, too. She founded her website, Flaca Forever, in 2013.

After developing and experimenting with different recipes, her cookbook, The Mexican Food Diet was published in 2017. She wanted the cookbook to contain healthy, but delicious recipes and tips, so one would feel like they were eating in a tasty and satisfying way without the deprivation that strict dieting can cause.

Today, she is a successful mom, author, healthy chef, integral nutritionist, and weight loss expert. As Davila says, “It is important to make every bite count to feel healthy and in turn, look good”.