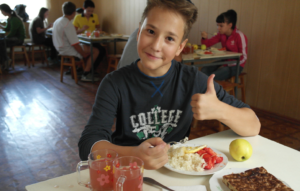 The Soviet Union may have dissolved in 1991, but many Jewish families are still struggling to emerge from the regime’s seven decades of antipathy towards their heritage. For some, their Jewish identity amounts to little more than a Jewish name and the bigotry that it attracts.

While anti-Semitism is by no means universal in the region, it is not uncommon either and its effect can be intimidating—and, in Tatiana Elokhina’s case, heartbreaking.

“My family was assimilated and I did not pay much importance to the fact I was Jewish,” says Tatiana, who lives in Bishkek, the capital of Kyrgyzstan. “But when my husband and I quarreled I was always subjected to insults related to my Jewish roots. I couldn’t put up with the harsh treatment given to me and my child.”

Tatiana got a divorce and, with her son, Ratibor, started a new life with a new partner. She had a daughter, Arina, but again found herself subjected to anti-Semitic abuse and filing for divorce.

Soon after, there were riots that led to the ouster of Kyrgyzstan President Kurmanbek Bakiev, and an upsurge in anti-Semitism. Anti-government protesters placed a banner on the fence of the presidential offices declaring that there was “no place for dirty Jews” in the country and the city’s synagogue was firebombed.

“Offensive and threatening graffiti appeared on people’s houses and many of my friends warned me that it could be dangerous to send my children to a Jewish school. But two unfortunate marriages had made me think about my origin—I had no reason to be ashamed! I had a strong desire to tell my children about their Jewish roots and to accustom them to Jewish traditions,” Tatiana says.

She found places for her children at the city’s ORT Pri Etz Chaim Jewish School after hearing good things about it from friends who had sent their children there. Like the other 17 schools in World ORT’s network in the former Soviet Union, Pri Etz Chaim offers a comprehensive education with an emphasis on science and technology and non-denominational Jewish studies. For Tatiana, coming from an assimilated background and working long hours as a market stallholder, the ORT school is connecting her children to their roots and equipping them for well-paid careers locally, or, if they choose, in Israel.

But the hope they and others in the ORT Pri Etz Chaim community now have might not have been possible without the support of Christians on the other side of the world.

Since 2008, when traditional sources of funding for social needs dried up, it has been the International Fellowship of Christians and Jews (IFCJ) that has stepped in, enabling World ORT’s schools to continue operating as Jewish institutions.

“Since 1880, it has been our organization’s mission to enable Jewish people to lift themselves out of poverty and dependency and into a brighter, self-sufficient existence,” says World ORT Director General and CEO Shmuel Sisso. “For most of those 135 years the kind of generosity that has been extended to us by the Christian community would have been unimaginable. This friendship is a beacon of hope at a time when our people need it so much.”

Thanks to the Fellowship, World ORT’s schools have been able to maintain subsidized bus services, hot lunches, and security for their students. The schools represent the only educational network in the region that caters to families on the margins of the Jewish community, including those who are eligible to make aliyah under the Law of Return but would not be recognized as Jewish according to halacha (Jewish law).

Organizing food may seem like a distraction for an organization that is providing high-tech equipment, teacher training, and pedagogic programs. But poverty, disability, and anti-social working hours mean that many parents would find it difficult—if not impossible—to prepare meals for their children, let alone meals nutritious and satisfying enough to keep them going through the long days made necessary by World ORT’s enhancement of the national curricula with STEM and Jewish studies. As studies by the American Psychological Association have shown, the resulting hunger could lead to depression, anxiety, and withdrawal, all of which are obstructions to a child trying to focus on learning. Further, resulting behavioral problems could lead to disruptions in class and thereby negatively affect the education of well-fed students.

Jewish communities in the former Soviet Union can be small and fragmented; there is often no communal center of gravity where an ORT school could be situated to ensure good accessibility to most people. Stressed transportation systems, severe weather, and the ever-present threat of crime and anti-Semitism mean that crossing town to get to school can be a lengthy and risky endeavor. The Fellowship’s funding has been keeping the wheels on the buses turning round, ensuring safe access for Jews regardless of which suburb they live in.

One does not need to look as far as the former Soviet Union to recognize the importance of security. The resurgence in anti-Semitism across Europe has seen CCTV cameras, high walls, guards, and other measures introduced at Jewish schools and other communal buildings. But in the United Kingdom, France, and other countries, government funding and wealthy local donors have managed to meet many security needs. World ORT’s schools further to the east do not have that luxury, and that’s where the Fellowship’s funding comes in.

“I’ve never doubted their safety at ORT Pri Etz Chaim,” says Tatiana. “Thanks to the support of the International Fellowship of Christians and Jews, there is an effective security system in place. It’s perhaps the safest school in the city! It’s not easy raising children alone; I work hard from morning ’til night without holidays and weekends as a market stallholder. When I get home I may be tired but I feel well knowing that my children have been getting a good education. And I don’t need to worry about whether my children are hungry—I know that they are always well-fed with tasty, home-style, kosher food… My children had no luck with fathers, but the care we have received from the Fellowship and ORT has given our family a future.”