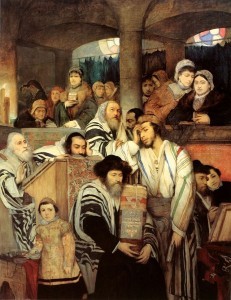 A depiction of Jews praying in synagogue on Yom Kippur. Thirty-two countries have asked the U.N. to recognize Yom Kippur as an official holiday. Credit: Maurycy Gottlieb via Wikimedia Commons.

(JNS.org) Thirty-two countries signed a letter circulated Wednesday in the United Nations General Assembly that requests the recognition of Yom Kippur as an official U.N. holiday. The letter follows an Israeli government campaign on the issue that was launched in May.

The U.N. “recognizes the major festivals of many of the world’s main religions, yet Judaism is not represented,” states the letter to the U.N. General Assembly’s Committee on Conferences, The Associated Press reported.

“We believe that the United Nations calendar should reflect the organization’s founding principles of coexistence, justice, and mutual respect… We urge the United Nations to correct this inequity and recognize the holiest day of the Jewish faith,” the letter says.