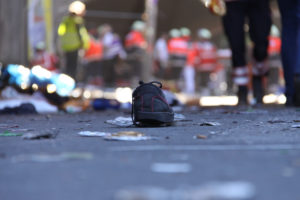 A group of innocent lives were savagely taken. The terrorists in this case, obviously copycatting ISIS, used axes and simple weapons and it appears that these seemingly spontaneous savage attacks are ongoing and continue to shock us in their barbarity.

So what would differentiate this terrorist attack from the attacks carried out during the Second Intifada from 2000–2004? It would appear that the terrorists have now sunk to new lows as they are willing to carry out attacks which require little or no advance planning and certainly not much backing or money. It is frightening, and although the perpetrators in this case have been caught, there is no consolation to the families. Israel does not render vengeance in itself a goal when dealing with such horrific events; so ultimately, can any type of justice be achieved? In such cases, what would constitute justice?

Let us go back to that period for a moment—when 24 well-funded terrorist attacks were carried out by Hamas.

Right next door to the American Embassy, the weekly blues jam session at Mike’s Place was underway. A birthday celebration was going on. Suddenly, the loud music and celebration turned to silence. The pub had now become a battlefield. This attack was very well planned and had been coordinated with political activists who had the freedom of movement within Israel. Two Hamas terrorists who had grown up in England approached the pub and were forbidden to enter by the security guard. One detonated his bomb—his remains scattered in the pub and viewed by the survivors upon exiting. The other’s body washed up in the sea three weeks later (After his bomb failed to detonate, and he ran away from the scene).

I am a singer (among other things). Before the attack, I had gotten off the stage, remained inside, and was hoping to go on again, as is the routine with jam sessions. Two musicians who had accompanied me on stage had gone out for some fresh air. Yanai Weiss, a music teacher, guitarist and father of two young sons led this jam every Tuesday.  Ran Baron, a 21-year-old keyboard player and entertainer had come for the first time to Mike’s Place. Both died that night. A lovely young French waitress, Dominique Hess, who had dreams of opening a French bakery in Tel Aviv was also killed. Many were wounded.

It was a difficult duty to visit these families as they sat Shiva. Weiss’s sons and wife asked what his last song had been. It was a blues song that I sung, so I sang it for them. Baron’s brother asked if his brother was having a good time that night. I said yes; he had smiled while onstage. It was all very sad and very difficult.

After such horrific events, how do families move on? How do the wounded heal, once the physical is treated—once the trauma therapists (in my case, Dr. David Grand to whom I am very thankful) and grief counselors see progress amongst the survivors, the bereaved families, the wounded and the traumatized?  Needless to say, to those who lost loved ones, there is no real healing, but rather coping. To those who have lost limbs, or remained physically or psychologically disabled; or in the least have severe post-traumatic stress disorder—there is no reconciliation but rather some sort of suppression of one’s inner turmoil in order to function from day to day. In this case, someone decided to undertake the mission of “moving on” to a new level.

When a tragedy happens, someone is accountable for all of this suffering. And someone is not just accountable for the unspeakable acts carried out—someone is accountable for the bank accounts. A terrorist could not have carried out all of this without being funded. So “someone”, i.e., several concerned and enlightened attorneys, decided that the best way to enforce accountability was simply to go to great lengths to follow the money trail, stop the bankrolling of terrorists and hope that the terrorists wouldn’t be able to continue their journey of destruction. Someone paid them, so someone’s gotta pay.

It would take a jury in Brooklyn to decide whether the Arab Bank—originating in the “Hashemite Kingdom of Jordan,” and in which the Jordanian government owns a small percentage was liable for enabling the transfer of funds to finance terrorist activities. Some 300 American citizens, who either survived the attacks between 2000 and 2004 or lost family members hence became Plaintiffs in this ongoing lawsuit. Initially, I spoke to one of the attorneys taking on the case, who stated that all of the victims and/or the families of those who perished deserved compensation for what they had gone through—their lives had been turned upside down and these lawyers were going to fight on behalf of the victims. The case is known as Linde et al. v. Arab Bank, PLC. Motley Rice attorneys Michael Elsner and John Eubanks were joined on the trial team by Osen LLC, Sayles Werbner PC and Turner & Associates PA. Motley Rice’s human rights lawyers represent both American citizens and international individuals who have suffered crimes against humanity and unjust infringement upon basic human rights through civil actions. Additional lawsuits have been filed over the years including those against National Westminster Bank (UK) and Credit Lyonnais Bank, (FR), as well as by other victims/survivors as Plaintiffs.

The first part of the trial took place over the summer of 2014 after some nine years of discovery (i.e., interviews, bank records and various testimonies). Compelling opening arguments began with a videotaped clip of the deposition of Steven Averbach, who confronted a suicide bomber aboard a bus in French Hill in Jerusalem in 2003 and subsequently became paralyzed. His sister was present in the courtroom.

Next up was a responding police officer from the Dolphinarium bombing from June 2001, who testified about the investigation, followed by various witnesses, including  Evan Kohlmann, an expert on Internet communications by terrorist groups. Kohlmann testified about Hamas’ official websites and information including calls for donations to an Arab Bank account that was held by Hamas’ spokesperson in Beirut. Matthew Levitt, an expert on Hamas who previously worked for the FBI provided “Hamas 101” for the jury in addition to testifying about the various charitable fundraising groups for Hamas in the West Bank, Gaza, Europe, and the U.S. Then, Joshua Faudem, director of the film, “Blues by the Beach,” which was being filmed at Mike’s Place the night of the attack and subsequently one of the most important eyewitnesses to the attack, took the stand. Faudem provided testimony about seeing the bomber before the attack and then recognizing him on the TV the following day, when the pre-suicide bombing video tape, typical of Hamas’ terrorists prior to carrying out attacks, was screened.

Other witnesses on behalf of Plaintiffs included economic expert Wayne Geisser, who presented to the jury an example of how funds flowed through Arab Bank; Ronni Shaked of the Israeli newspaper Yediot Aharonot and formerly of the Israeli General Security Service testified on Hamas’ claims of responsibility for 24 attacks and Arye Spitzen, former chief of the Israeli military’s Palestinian Affairs Department, who cited Hamas bank accounts with Arab Bank.

Substantiated evidence and testimonies regarding money flowing through the Saudi Committee to Hamas terrorists and families of suicide bombers and the holding of accounts at Arab Bank by Hamas “superstars,” including Sheikh Ahmed Yassin, were exhibited.

The bank offered quite a few witnesses of its own, mostly current and former Bank employees. The bank was adamant about their claim that certain information was not revealed during discovery over the years, as revealing clients’ account information violated their bank-secrecy regulations.

I sat in on several days of the trial. It was my intention to see this through. We, the survivors, in addition to expressing our gratitude to the lawyers’ unconditional dedication, prayed every day that justice would be served. The jury took only a few days to reach a decision: the bank was liable for allowing the funds to be transferred for a total of 24 attacks. The bank was liable for knowing to whom the money was being transferred.

But it is not over. The bank has sought leave to appeal, damages hearings only will begin this summer, and it won’t be easy. I will be there as much as I can. As a survivor, I owe it to my lost friends to see this through to the end. Ironically, I’ve recently read that the The Hashemite Kingdom of Jordan is getting some strong support for their case by yet another prominent lawyer—someone named Goldstein.

Editor’s note: Since the jury decision of last year, it is possible that not all 24 cases will be granted damages hearings for the purposes of this litigation.

Judy Buchman-Ziv is originally from New York and lived in Israel for 30 years. She holds a B.F.A. from Tel Aviv University in Theater Arts and is a professional musician in addition to working as a patent prosecution secretary. Buchman is very active in synagogue-related activities and has spoken on numerous occasions over the years including at screenings of the film Blues by the Beach. She has also written several articles about the terrorist attack on Mike’s Place. She currently lives in New York City.