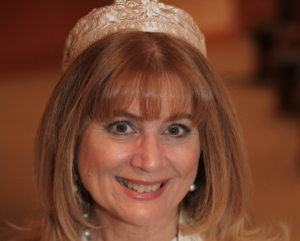 On August 9, 2019, Temple Etz Rimon of Carlsbad welcomed Cantor Caitlin Bromberg as she led her first Shabbat service as the congregation’s new spiritual leader. Cantor Bromberg succeeded Rabbi Karen Sherman, who, after a 10-year tenure leading the Reform congregation, left to take a position closer to her home in Orange County.

“Her love for the Shabbat service was palpable,” said Dorie Goldman, congregational president. She added that congregants were impressed with Cantor Bromberg’s warmth, enthusiasm, and friendliness as well as her ability to connect Jewish tradition to current news events.

Bromberg was born and raised as an Irish Catholic in an artistic San Diego family. Her mother worked at the Old Globe Theater as an educator and previously worked as an actress, so Cantor Bromberg is familiar with what it takes to perform in front of an audience. Her interest in Judaism also goes back to her childhood, and after studying theater and anthropology at UCSD, she moved to New York where she participated in the folk music scene and met Jewish folk musicians. Her friends introduced her to Jewish music and synagogue life; she met a female rabbi and was on her way to living a Jewish life and becoming a Jewish leader. Noting that “all religious expressions begin with acting out stories with music,” Cantor Bromberg made a connection between culture, religion and theater.

At age 26, she chose converted to Judaism in a Reform synagogue and swiftly became a cantorial soloist; a few years later, she completed an Orthodox conversion. Further exploration of the denominations led her into Conservative, Reconstructionist and Jewish Renewal communities and leadership. She was accepted into Cantorial school at the Jewish Theological Seminary, where she earned a master’s degree in sacred music and a diploma of hazzan, leading to cantorial ordination in 2000.

Bromberg’s first job was at a Conservative shul in El Paso, Texas, where she served as both cantor and assistant rabbi. She then went on to serve as cantor at temples in Albuquerque, New Mexico and Ridgewood, N.J., where she also served as a coordinator for an Introduction to Judaism course at the Union for Reform Judaism in New York and New Jersey.

After returning to San Diego in 2017, Cantor Bromberg served as interim rabbi at Temple Ner Tamid in Poway before to taking her current position at Temple Etz Rimon, a welcoming and forward-thinking community of approximately 100 members. She is now pursuing rabbinic ordination at the Academy of Jewish Religion in Los Angeles.

Cantor Bromberg described her desire to be a Jewish religious leader as akin to a little girl watching a ballet and exclaiming, “I wanna do that when I grow up!” And as somebody who followed and fulfilled her dream of becoming a cantor, she has great advice for other girls who would like to become cantors one day. “Learn to be a song leader at camp, get involved in your synagogue, and study,” she said. “Ask your local cantor to coach you, pursue vocal and musical education as well as advanced Jewish studies.”

Cantor Bromberg admits that there are still gender challenges for women in this profession, and adds “Stay focused on what you are doing, do it well, and do not pay attention to other people’s attitudes.”