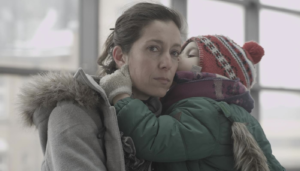 The widely viewed “Telling Israel’s Story” film—directed by Resh for a gala event hosted by the Times of Israel online news outlet—seemingly begins as a promotional tourism video, but quickly evolves to offer a multilayered perspective.

“I want to tell you a story about a special place for me,” a young woman whispers as soft meditative music stirs. Spinning shots ensue, depicting the natural beauty of Israel’s geography, landmarks, and intriguing walks through the country’s iconic cities. Intermixed are portraits of smiling or contemplative Israelis of diverse backgrounds. Viewers glimpse the religious passions underlying the society; the creative business, high tech, and artistic ventures for which Israelis are known; and, yes, the political tensions and violence that all too often put Israel in the news.

As the film proceeds and the music slows, a police car drives down a deserted Jerusalem street, Prime Minister Benjamin Netanyahu meets with President Barack Obama, and there is discord in the Knesset legislature. Sirens blare as a rocket streaks across the clear night sky, and the audience is held in a moment of suspense. But when the rocket is later revealed to be part of a festive fireworks show, the music and montage resume with renewed vigor, depicting the celebration of life that underlies Israeli existence.

“I see it as my responsibility to use my abilities to change Israel’s image in the U.S. and the world,” Resh said.

Responding to critics who have called “Telling Israel’s Story” an outright pro-Israel propaganda film, Resh admits that he stirred a hornet’s nest. “I received death threats, and there were many nasty comments posted on YouTube,” he said.

Nevertheless, the 1.5 million views the film has garnered worldwide affirm the general appreciation of the work.

Resh points out that “the problem of offering a rounded perspective [of Israel], through film, is the entry point.” He describes Israel as a “country of dichotomies—a vibrant place where many forces are colliding.” In his view, each “flashpoint” actually leads to many beautiful exchanges between individuals, but viewers who are frightened or frustrated by the violence they’ve witnessed personally, or in the news, often will prejudge a film if they don’t immediately see their personal biases validated.

Resh’s new animated film, “Searching For Them,” opens in stark contrast to “Telling Israel’s Story.” Through the sight on a sniper’s rifle, audiences glimpse the smoldering Gaza landscape in 2009, amid Israel’s Operation Cast Lead. This short feature about two brothers who were killed in that conflict premiered during prime time last week on Israeli television. Resh’s hope is that when critics of Israel see the military’s destruction in Gaza explicitly painted from the very first frame, they hold their fire and are more willing to watch the rest of the film with open minds. The perspective then pans outward, exploring the terror of the Hamas rocket attacks that precipitated military engagement, and the deep wounds from the clash that extend to both sides.

Resh said there is a “beauty and complexity” to Israel and Israelis that is often overlooked or misunderstood.

“How strange that Israel has its Memorial Day and then one day later celebrates Independence Day?” he muses.

While there is elation that the Jewish people survived the Holocaust and established a state just a few years later, that joy is tempered by the harsh everyday realities and personal scars that affect many in Israel today.

“We carry a lot on our backs,” Resh said.

Hinting at this uniquely Israeli mindset is “Arrival,” directed by Resh when he was studying at the California Institute of the Arts. The short film, which was showcased at the Walt Disney Concert Hall in Los Angeles, opens with an Israeli mother riding a train to Berlin with her young son. The fidgety and talkative boy attracts the attention of an elderly German woman who invites him to play with her. The mother, meanwhile, grows increasingly anxious about the encounter as well as her pending business in Berlin.

“I perceived this character as a young mother, though at the same time an old soul,” Keren Shalev, the Israeli actress cast as the mother in “Arrival,” said. Her journey implies facing an “attic of stored memories,” she said. Shalev reflects that the challenge her role in the film presented was to find a reason to smile at the German woman despite being ill-prepared for their loaded encounter.

“Where there was anger and resentment, a new stillness came forward and introduced me with embarrassment,” said Shalev.

“I believe art and everything in our world is about tension,” Resh said, explaining his artistic choices as a director. He notes that Shalev speaks about her experience of acting in his film with the luxury of hindsight. At the time of filming, he actually dropped her into the scene with very few instructions as to how she should assume her character. He said that otherwise, “I would not have gotten the performance I wanted.” For this reason, Shalev’s emotional expressions appear authentic.

Resh said that “Arrival,” which was inspired by the trip he took to Berlin with his mother when he was very young, is part of a longer film that he plans to direct one day—another chapter in his varied and nuanced telling of Israel’s story.