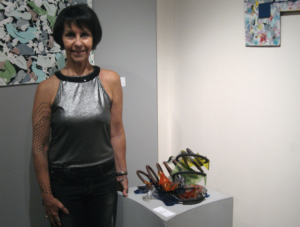 A new exhibit opened at the Gotthelf Art Gallery in September. The gallery is part of the San Diego Center for Jewish Culture, and the exhibit will feature different artists’ interpretations on the meaning of Shabbat.

Two of those artists, Rafael [Fallo] Mareyna and Becky Guttin are an interesting father and daughter duo who take the meaning of Shabbat very seriously.

Guttin is a diminutive woman with a large presence. She is an international artist with permanent collections in Israel, Mexico, South Korea, Malaysia, Austria, India, and various cities in the United States.

A whirlwind of energy and creativity, she sees art where others might not. She is known for collecting all kinds of discarded objects and giving them new life. She works daily in her studio on Miramar Road.

She is also a woman of contradictions, like most good artists. A practicing Jew, she holds Shabbat dinners every Friday. When asked what Shabbat means to her, she replied, “Shabbat is for me the day when my family and sometimes friends sit together to have an early dinner while talking, laughing, and sharing. It’s the day we all know we’ll meet and have a lovely and good time together.”

Family is important to Guttin. She is a devoted mother to her three children and one granddaughter. She spends a great deal of time with her parents, especially her father, who has his workshop next to hers.

On the other hand, she is also well known in the local bohemian artist world. She sports intricate tattoos on her hands and arms that look like henna. She is a combination of the conservative Mexican Jew and rebel artist, who is also an American citizen.

She inherited her artistic, rebellious, and humorous streak from her father. At 86, Rafael “Fallo” Mareyna is still going strong. He has a knack for combining good art with good humor. For Mareyna, it is also the rekindling of an old passion.

Mareyna, nicknamed Fallo [pronounced FAYO], was born in the state of Veracruz in 1930. His parents were Polish Jews who arrived in Mexico in 1924. They moved to Mexico City a few years later.

As a young boy, he attracted his teacher’s attention with his natural ability to draw. He began to paint with oil and continued his passion for the next 20 years or so, exhibiting in different galleries in Mexico City, Monterrey and he even had a show in New York City while he was in high school.

However, it is difficult to make a living as an artist and as was the social norm for Jews in Mexico at that time, he followed a more traditional path. He married Dora [Dorita] Sorokin, had two children, and needed to provide for his family, so he left art to pursue a more lucrative career.

For almost 30 years, he provided very well for his family, opening up a successful brokerage firm in 1966, called Bursamex, S.A. He retired in 1992. He did not paint for all those years and his art was put on the back burner.

However, he did live it vicariously through his gifted daughter who delighted him with her various talents growing up, playing the piano and the guitar, and studying ballet. She inherited his love of art and grew up among the artist friends that he socialized with. She was also the conduit for helping her father rekindle his old passion.

In 1998, Rafael and his family moved to La Jolla to begin a new chapter in life, and he began to feel pangs for the art he had left behind. In 2005, his daughter invited him to come and work with her in her workshop. Not only that, unbeknownst to him and much to his surprise and delight, she had kept all of his old art furniture, including his easel, so he was able to dive right back in.

One can see how Guttin inherited her father’s talent and twinkle. Both possess a Bohemian spirit and a down to earth sense of family and duty with most Shabbat dinners being held every Friday at Guttin’s home. For Mareyna, Shabbat also means a cherished time to celebrate with family and friends and to pay homage to all the Jews before him, and all that they went through. He says he dreams of peace and hopes that his paintings reflect that.

This exhibit is really tailored made for them both!

Revisiting Shabbat runs through November 23 at the Gotthelf Gallery, open daily (except Saturdays) from 9 a.m. to 5 p.m.