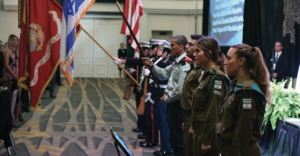 For Jews the world over, Israel remains central to their very identity, and inspires the hopes and dreams of the Jewish people. Every single day, the brave men and women of the Israel Defense Forces (IDF) put their lives on the line to protect those hopes and dreams, and the Friends of the Israel Defense Forces (FIDF) is in turn devoted to helping these defenders of the Jewish homeland with educational and wellbeing support.

The IDF’s central mission is: “To defend the existence, territorial integrity, and sovereignty of the state of Israel. To protect the inhabitants of Israel and to combat all forms of terrorism which threaten the daily life.” No organization has played such an important role in ensuring that IDF soldiers are cared for while carrying out their crucial tasks quite like FIDF, which since 1981 has been at the forefront of supporting Israel’s brave heroes as they protect the Jewish homeland.

A Night of Heroes

The FIDF San Diego Gala will honor Sydney and Denise Selati, key pillars of the community.

While the IDF protects Jews in Israel and around the world, FIDF changes the lives of IDF soldiers during, and after, their military service, through its mission: “To offer cultural, recreational, and social services programs and facilities that provide hope, purpose, and life changing support for the soldiers who protect Israel and Jews worldwide.”

One of FIDF’s flagship programs is supporting Lone Soldiers – those who leave their native countries to join the IDF and serve with no immediate family in Israel. This program lies at the core of the powerful relationship between the United States and Israel. The growing Lone Soldier phenomenon is the most treasured link between Jewish communities in the United States and those in Israel. Each Lone Soldier has their own personal reason for joining the IDF, yet a strong love of Israel and a sense of duty are universal among both soldiers who volunteer to serve and the families they leave behind.

For the 2018-2019 academic year, FIDF granted 4,580 IMPACT! scholarships to IDF combat veterans who could not afford the cost of higher education, sponsoring students at over 80 institutions throughout Israel. Through this program, FIDF helps to guarantee that Israel’s soldiers continue to grow as educated citizens and leaders. Each IMPACT! student volunteers in the community for a total of 130 hours each year of their studies, ensuring these veterans pay it forward by helping at 20 different nonprofit organizations.

Since the inception of the FIDF IMPACT! Scholarship Program in 2002, IMPACT! students have volunteered over 5.5 million hours of community service, making it the top scholarship program in providing community service in Israel. About 8,900 IMPACT! graduates have entered the Israeli workforce to date.

The FIDF LEGACY program is another way FIDF offers support to the families of IDF heroes – by helping 5,790 widows, orphans, siblings, and other family members of fallen IDF soldiers through a variety of life-cycle celebrations, including trips to the U.S. for Bar/Bat Mitzvah children, R&R weeks in Israel, recreational activities, financial support, and special family days.

Investing in construction projects, FIDF builds, refurbishes, and maintains facilities for the well-being of IDF soldiers – including sports centers, culture halls, synagogues, memorial rooms, swimming pools, and soldiers’ homes throughout Israel. FIDF’s newest series of projects includes 7 facilities serving the IDF’s elite units, at a total cost of $14.5 million. FIDF continues to build the wellbeing and education centers at the IDF Training Campus in the Negev, where FIDF funded the construction of 12 facilities at a total cost of $43 million.

In addition, in 2018, FIDF helped 910 soldiers wounded in battle to rebuild their lives through financial aid, mentoring, recreational activities, employment assistance, and athletic prostheses for amputees injured during military service through the FIDF Strides Program; granted financial aid, basic appliances and furniture, food vouchers, special grants, and holiday gift vouchers to over 8,000 soldiers in-need; funded 39 weeks of crucial rest and recuperation to combat soldiers; and FIDF supporters formed unbreakable bonds with the soldiers of 10 brigades and 70 battalions, squadrons, and flotillas.

“As they did 71 years ago, the brave men and women of the IDF still put their lives on the line every day to protect Israel and Jews around the world,” said FIDF Executive Director in San Diego, Orange County, and Arizona Oz Laniado. “This evening will give our community a chance to meet and personally thank the heroes who risk it all to defend the Jewish homeland, and our supporters will hear firsthand about the incredible impact FIDF’s well-being programs have on these soldiers’ lives.”