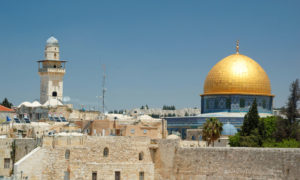 In September, The Jewish Federation of San Diego County hosted Aryeh Green, journalist and Director of MediaCentral, a Jerusalem-based initiative and part of Honest Reporting, providing support services to foreign journalists based in or visiting Israel. Federation’s event was part of its Israel Connections program, which works to promote stronger people-to-people ties and bonds between Israelis and the San Diego Jewish community. For information on other events and Israel Connections programming hosted by Federation, visit JewishinSanDiego.org.

Reporting from the Middle East is challenging. Journalists in Israel are subject to conflict of prospective, varying narratives, languages and cultures. Staying objective can be difficult.

MediaCentral is a base camp for foreign journalists visiting or based in Israel. The organization, which is not part of the government of Israel nor an advocate for Israel, helps journalists get their stories right by providing them with immediate and accurate information and access to sources, such as tour guides, translators and photographers.

“We want to help reporters achieve their goal of reporting accurately from the field,” Green said. “We’re not here to tell you Israel is always right. We’re here to help you go deeper into the nuances of the stories you are covering; to understand the complexities of the issues here.”

The organization has a diverse staff that includes Jews and a Palestinian Arab Muslim. Green, who grew up in San Francisco and spent the last 20 years in Israel, has served on the executive staff on Natan Sharansky’s Y’Aliyah Party and dedicated most of his life to promoting peace in the Middle East area. Green has also coordinated support for Jewish students around the world. He said MediaCentral owes much of its success to its approach to building relationships with journalists; in hopes that the media views MediaCentral as a partner rather than a competitor.

One of the positive effects MediaCentral has had on the media is the change in terminology used by major news outlets on the subject of Israel.

“The media’s language affects not only public attitude or the attitudes of the media, but public policy and our decision makers,” Green said. “Even those who believe in Israel’s right to exist end up using language; calling territories ‘occupied territories’ instead of ‘disputed territories.’ The territories are legally, politically and historically [the subject of] dispute.”

Moreover, Green states that there are two major misconceptions about Israel today. The first, that Israel is the oppressor and Palestine the underdog.

The other misconception has to do with the historical and political background of Israel.

“A general misconception is that Palestinian Arabs have lived in Israel for generations, if not eons, and that the European Jews came in as colonialists and imperialist implants with no connections to the land and therefore their presence is illegal and immoral,” Green said. “Some people believe that the guilt of European society over the Holocaust lead to the establishment of Israel.”

Green concludes that Judaism is both a national and religious identity. “We should have called the land Judea!” he said. “Jews going to Judea would have been better understood.”